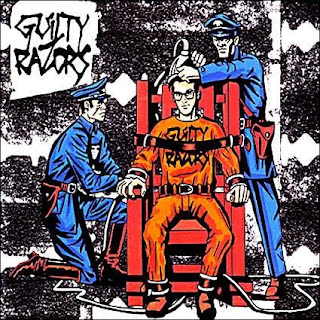 Guilty Razors - 2006 - Guilty! (FRA)
download@rapidshare
download@multiupload
.
As far as I've pieced together, The Guilty Razors are a bunch of Spaniards who lived in France and formed a punk bad that sang lyrics in English sometime in the late 70's. There aren't too many available "facts" about this band, but what I didn't manage to find is pretty fucking interesting.
What I can tell you for sure is that sometime in the 1979, The Guilty Razors released a 3 song 7" single on Polydor Records. It didn't sell too many copies, and the unsold vinyl was melted down, thus making the few surviving copies extremely rare. Regardless of the marketability of their music, The Guilty Razors managed to come up with the best image for a t-shirt in the entire history of music.
After falling off the musical map, The Guilty Razors got a lucky break and had a single appear on the important punk rock compilation series Killed By Death #7. That was the last anyone had heard from this band until recently, when a compilation popped up on iTunes.
The longest song on the compilation "Guilty!" clocks in at 3 minutes and 19 seconds. It should be noted that "Guilty" appears to be a compilation of everything the band ever recorded. Some songs are obviously live and very, very raw. Some songs are obviously studio tracks. Whatever. The majority of the songs are pretty fucking awesome, and since the songs are all in English, you don't need to be trilingual to figure that out.
The sound of The Guilty Razors isn't exactly unique. Sometimes they sound like The Damned. Sometimes they sound like The Undertones. Sometimes they sound like bad Clash b-sides. But that isn't to say that The Guilty Razors are some derivative band that doesn't warrant further listening. On the contrary, they seem to run with their borrowed riffs into a head-on collision of immigrant middle-class angst; thus producing something completely unique in the pantheon of punk rock. Notice I said "unique" and not "different." If you expect to hear a style of punk you've never heard before, then you're out of luck. But if you're looking for a good early punk band that somehow flew under the radar, you should give these Spaniards a chance.
There isn't a cohesive running theme throughout this compilation, but it's obvious from the comprehensible lyrics that these guys are decidedly working class. Songs revolve around alcohol abuse("Wake Up, find a drink,"), mindless sex ("Happy"), and class warfare ("Don' Want To be A Rich."). Both the lyrics and the themes sound British; mostly due to their slurring of words and chorus-filled refrains than anything else.
From what I've discovered, the singer Tristan went on to have a solo career with the French hit ”Je suis de bonne humeur ce matin” and the remaining band members formed the group "Bandolero."
.
by Adam Blank at Thunder Matt's Sallon (link)
Posted by isksp at 5:32 PM

Thanks for posting. Very interested in hearing this. Great Blog by the way.

Cheers
Angry (Days of Our Youth)

Hmmm, these mp3's sound sped up, like they are playing too fast. The versions that are on iTunes play at the right pitch/speed. The Little Balls blog posted this LP about a year ago or so and his mp3's sounded like they played too fast also. Just wanted to let you know.