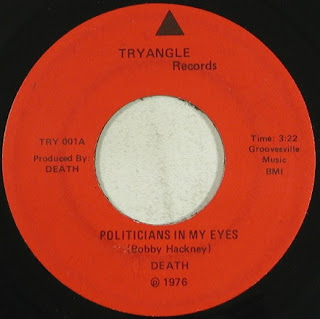 Death - 1976  - Politicians in my Eyes 7'' (US)
download@rapidshare
download@mediashare
.
Death was a garage rock and punk rock band formed in Detroit, Michigan, in 1971 by the brothers Bobby (bass, vocals), David (guitar), and Dannis (drums) Hackney. The African American trio started out as an R&B band but switched to rock after seeing an Alice Cooper show. Music critic Peter Margasak (incorrectly denoting the youngest brother) retrospectively wrote of their musical direction: "The youngest of the brothers, guitarist David, pushed the group in a hard-rock direction that presaged punk, and while this certainly didn’t help them find a following in the mid-70s, today it makes them look like visionaries."
In the early 1960s, the young Hackney brothers were sat down by their father to witness The Beatles' first appearance on The Ed Sullivan Show. The following day, David found a discarded guitar in an alley and set about learning to play. Brothers Bobby and Dannis soon followed suit and they began playing music together.

The brothers practiced and recorded early demos in a room in the family home and performed their earliest gigs from their garage. Originally calling themselves Rock Fire Funk Express, guitarist David convinced his brothers to change the name of the band to Death. "His concept was spinning death from the negative to the positive. It was a hard sell", Bobby Hackney recalled in 2010.

In 1974 at Detroit’s United Sound Studios with engineer Jim Vitti, they recorded seven songs written by David and Bobby. According to the Hackney family, Columbia Records president Clive Davis funded the recording sessions, but implored the band to change its name to something more commercially palatable than Death. When the Hackneys refused, Davis ceased his support. At any rate, they only recorded seven songs instead of the planned dozen. The following year they self-released 500 copies from the session on the 7" single “Politicians in My Eyes” b/w “Keep on Knocking,” on their Tryangle label. Death officially broke up in 1977.

The brothers then moved to Burlington, Vermont, and released two albums of gospel rock as The 4th Movement in the early 1980s. David moved back to Detroit in 1982, and died of lung cancer in 2000. Bobby and Dannis still reside in Vermont and lead the reggae band Lambsbread.
In 2009, Drag City Records released all seven Death songs from their 1974 United Sound sessions on CD and LP under the title ...For the Whole World to See. In September 2009, a reformed Death played three shows with original members Bobby and Dannis Hackney, with Lambsbread guitarist Bobbie Duncan taking the place of the late David Hackney.

During a 2010 performance at the Boomslang Festival in Lexington, Kentucky the band announced that Drag City would release a new album with demos and rough cuts that predate the 1974 sessions. The album Spiritual • Mental • Physical was released in January 2011.
.
source Wikipedia (link)
Posted by isksp at 4:35 PM 13 comments: