Pointed Sticks, The - 1995 - Part Of The Noise (CAD)
download
.
Pointed Sticks were a Canadian punk rock/power pop band from Vancouver, first active from 1978 to 1981, and reunited to perform in 2006 and 2007.
They were the first Canadian band signed to Stiff Records, although the label was going through financial problems and never released an album by the band. The band consisted of vocalist Nick Jones, guitarist Bill Napier-Hemy, later keyboardist Gord Nicholl (from Active Dog), bassist Tony Bardach and drummer Ian Tiles. Johnny Ferreira later joined on saxophone, Bardach was replaced by Scott Watson on bass, and Tiles was replaced by drummer Robert Bruce (from Active Dog), and later by Ken "Dimwit" Montgomery. The band released four singles before releasing their only full-length album, Perfect Youth in 1980.
All of their recordings were re-released in 1995 on the compilation Part of the Noise. In 2005, Perfect Youth was reissued by Sudden Death Records, alongside a new compilation of singles, outtakes, and other rarities, entitled Waiting for the Real Thing. The original band members reunited in 2006 for a Japanese tour, and they have played reunion concerts in Canada and the United States in late 2006, early 2007 and have continued to perform and record through 2008.
.
source Wikipedia (link)
Posted by isksp at 5:55 PM 1 comment: 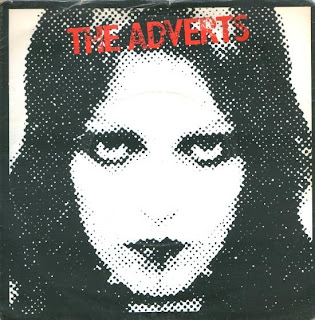 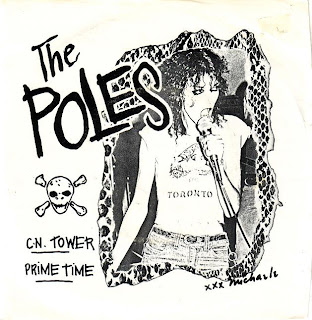 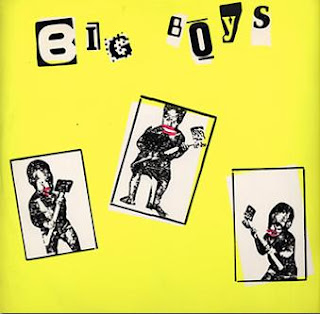 Big Boys - 1981 - Where's My Towel (US)
download
.
Released in 1981, “Where’s My Towel“ aka Industry Standard was recorded at Rampart Recording Studio and produced by David Bean and the Big Boys. Limited to an initial release of several hundred copies, the album was released with hand silkscreened covers and included some of the bands’ most diverse and popular songs of the time including “TV”, “Complete Control”, “Identity Crisis”, and “Security”. Often hailed as the band’s greatest album, Where’s My Towel is a milestone in the history of Texas punk and an original pressing is now considered a major collectible.
.
source Waster Talent Records (link)
Posted by isksp at 2:52 PM 4 comments:

Email ThisBlogThis!Share to TwitterShare to FacebookShare to Pinterest
Labels: - US, Big Boys 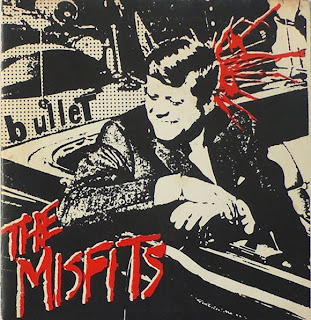 Email ThisBlogThis!Share to TwitterShare to FacebookShare to Pinterest
Labels: - US, Misfits 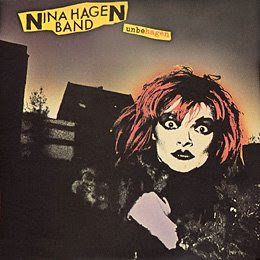 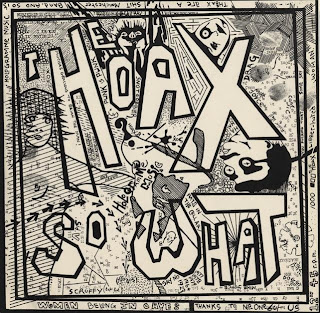 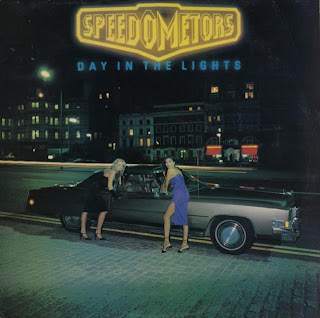 Speedometors - 1979 - Day In The Lights (UK)
download
.
The Speedometors or Speed-O-Metors are a London, New Wave and punk band formed in 1976 in Shepherd's Bush by Martin Finlay, Robbie Watson and Lol Gellor (previously of west London band "Rough Diamonds" and joined shortly thereafter by Ian "Toose" Taylor late of the Mike Batt-produced group Houdini.
The Speedometors attracted the attention of Colin Barton's indie label Mascot Records and the release of the single "Disgrace/Work" put the band on the indie charts. Drummer Lol Gellor decided to leave the band to produce records starting with reggae star Desmond Dekker's LP "Black and Dekker". Steve Parry of Chiswick records act "Radio Stars" replaced Gellor.
Meanwhile the "Disgrace" single caught the ear of producer Miki Dallon, who presented the disc to industry reps at the Midem song festival resulting in the band being signed by "ex" RSO records chief Chris Yule for his new Acrobat/Arista label. The signing resulted in the release of the "Day in the lights" LP. During recording of the LP Steve Parry left the band and was replaced by Paul Spencer from Howard Devoto's band "Magazine". As result of the LP sessions the band added Lee Dallon on keyboards and Chris Gent,sax/vocals of the Autographs and ex Houdini for live appearances. The single "Tonight Tonight" received plays on B.B.C. Radio one and a live at the B.B.C. session amongst others. The band continued to tour the U.K. with such acts as Sham 69, Ultravox (then featuring John Foxx as singer and frontman) and other notable "new wavers". Club shows included a residency at the Marquee Club in Wardour St London,coupled with two appearances at the famed "Reading Festival".
.
source Wikipedia (link)
Posted by isksp at 7:39 PM 4 comments: 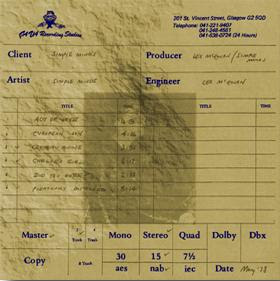 additional informationWhen people talk about the Life In A Day demos, or the first Simple Minds demo tape, then this is normally the tape they’re referring to.This demo tape was part of the legendary backlash against Life In A Day - many felt the album lost the edge of these raw recordings.
These demos were recorded to get press and record company interest, with cassette copies being widely circulated. Despite that, they weren’t bootlegged. One copy landed on Bruce Findlay's desk, but he had fulfilled Zoom's plans for that year and didn't see any reason for taking the band on.
Tony Donald had just departed, so Derek Forbes temporarily filled the role of bass - he wanted to return to lead guitar after playing bass in The Subhumans. However, his guitar was stolen whilst recording these demos, so Derek Forbes asked to stay on as the band’s bass player.
It cost £226 to record.
Lex McEwan was Brian Young's engineer. Lex left the studio a year later to become a surfer in Cornwall.
Some biographers mention a song called Doo Be Doo - this was the original title of Did You Ever?.
On some later cassette copies, the band replaced European Son with the earlier demo of Wasteland.
These demos were eventually released on The Early Years 1977-1978 CD compilation.
The image of the demo tape box was taken from The Early Years 1977-1978, on which the graphics designers have superimposed a graphic of Jim.
.
source Simple Minds (link)
Posted by isksp at 7:36 PM No comments:

Original recordings made at Morgan Studios, London, 1980
Re-recordings and remixing made at Basing Street Studios and Odyssey Studios, London 1982
Rear sleeve notes list tracks in incorrect order as follows:
Side One:
1. Logan Time
2. Paper House
3. Deeply Concerned
4. Even Dogs In The Wild
5. Transport To Central
Side Two:
1. Amused As Always
2. The Affectionate Punch
3. A Matter Of Gender
4. Would I,...Bounce Back?
5. A
Posted by isksp at 7:04 PM 4 comments: 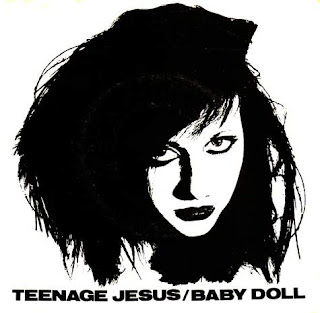 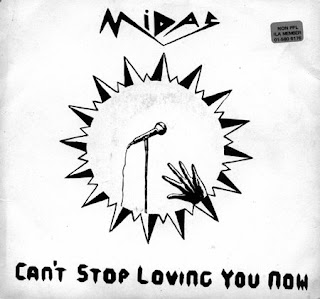 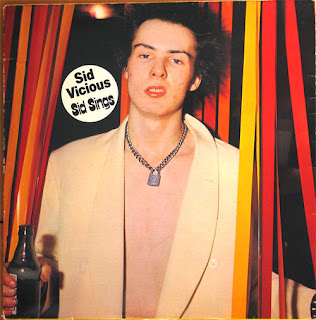 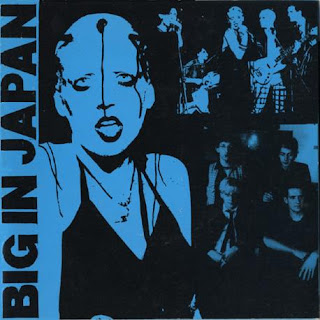 Big In Japan - 1978 - From Y To Z And Never Again 7'' (UK)
download
.
From Y To Z and Never Again is an EP released by the seminal punk band Big in Japan. It includes four out of their six recorded songs and is most notable for being the first release on Zoo Records, the label created by band members Bill Drummond and David Balfe. It was also one of the first releases that came from the late 70s-early 80s Liverpool rock scene. The scene also included, amongst others, Echo & the Bunnymen, OMD, The Teardrop Explodes and Dalek I Love You .
The EP has been out of print since 1978, but all the tracks are available on the Zoo Records compilation Zoo Uncaged.
The tracklisting presents part of the numerous line-up changes the band suffered during their two years of existence. The only remaining members of the band during the recording of the EP were (or seemed to be) Bill Drummond and Ian Broudie.
.
source Wikipedia (link)
Posted by isksp at 7:04 PM 1 comment:

Email ThisBlogThis!Share to TwitterShare to FacebookShare to Pinterest
Labels: - UK, Big In Japan 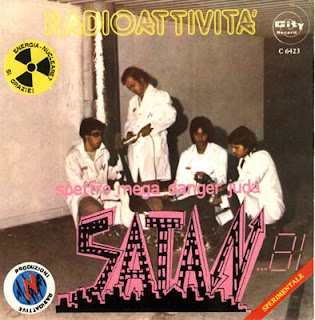 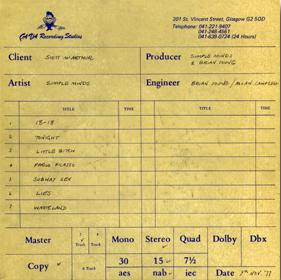 additional informationThe second Abusers' demo tape was recorded under the name of Simple Minds. Arguably this is the first recording with the Simple Minds name.Two weeks after recording this demo, Chiswick finally released the Saints And Sinners single and the line-up fragmented.
Reforming Simple Minds took another few months, and the new band recorded two other demo tapes before entering the studio to cut their first album. Therefore, almost none of these tracks were used (with the exception of Wasteland).
These demos were eventually released on the The Early Years 1977-78 CD in March 1998
.
source Simple Minds (link)
Posted by isksp at 8:37 PM 3 comments: 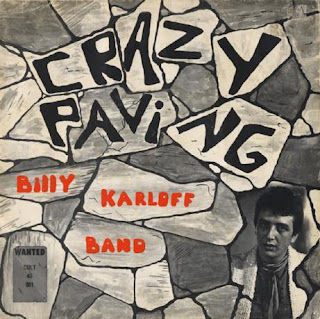 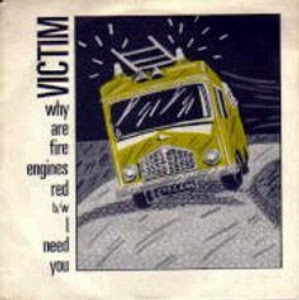 Victim - 1979 - Why Are Fire Engines Red 7'' (UK)
download
.
Formed in Belfast in Mid -1977, Victim soon became familiar faces on the emerging Belfast scene. Following their appearance on the legendary UTV punk documentary 'It Makes You Want Top Spit' and a rapidly increasing live following, Terri Hooley signed the band to his Good Vibrations label in 1978 and released Strange Thing By Night / Mixed Up World costing just £90 to record.In early 1978, prompted by a lack of venues, Victim made a trip to a local city centre pub because they heard it had a stage! They secured a gig and the legendary Harp Bar was born as a punk venue.
In July 1979 they were offered a modest record deal by TJM Records and decided to depart to England, settling in Manchester. Early gigs saw them playing with The Fall and Revillos as well as playing the legendary Factory club to accompany the screening of Shellshock Rock, a film on Irish punk featuring among others Victim.A second release Why Are Fire Engines Red / I Need You on TJM secured good reviews and radio support from John Peel despite its horrendous cover. In November 1979 Victim supported the Damned on an extensive tour. Rat Scabies produced the band's third and in my view best single The Teenage / Junior Criminals / Hang Onto Yourself released in 1980 on Illuminated records.
The band continued for several years with line up changes including Mike Joyce (later of The Smiths) and Toni Isaac (the girl leaning against a lamppost on Jilted John's single of the same name!) before deciding to call it a day.
In retrospect they lacked the bite of SLF or the innocence and plaintiveness of the Undertones. Punky sounding titles like Youth Wielding Stones and Young Criminals belied their poppier sound. A minor band who achieved minor status.
.
source punk77.co.uk (link)
Posted by isksp at 5:03 PM 4 comments: 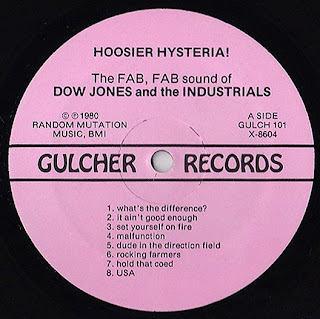 Dow Jones and The Industrials - 1980 - Hoosier Hysteria! (US)
download
Posted by isksp at 5:00 PM No comments: