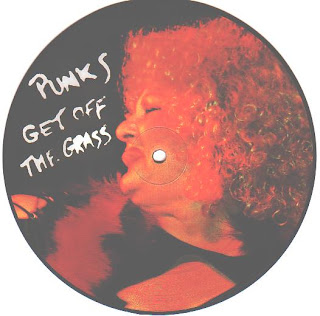 Email ThisBlogThis!Share to TwitterShare to FacebookShare to Pinterest
Labels: - US, Edith Massey 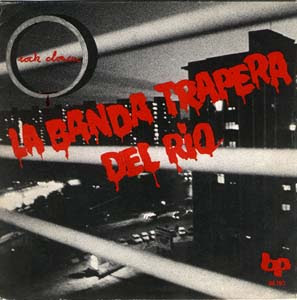 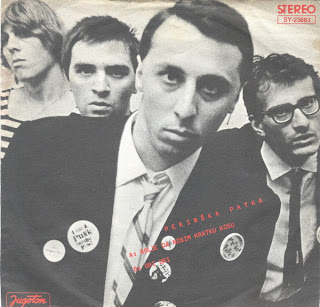 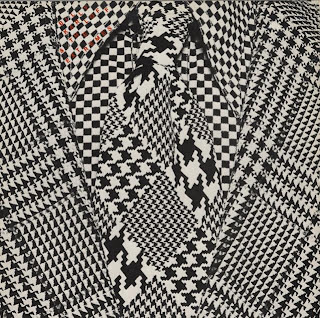 Billy Karloff And The Extremes - 1981 - Let Your Fingers Do The Talking (UK)
download
Posted by isksp at 3:47 PM 6 comments:

Email ThisBlogThis!Share to TwitterShare to FacebookShare to Pinterest
Labels: - UK, Billy Karloff And The Extremes 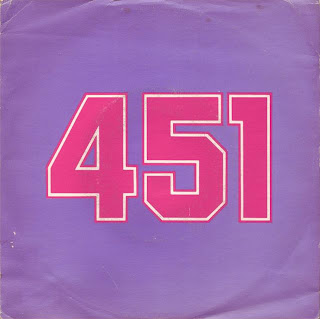 Email ThisBlogThis!Share to TwitterShare to FacebookShare to Pinterest
Labels: - Italy, 451 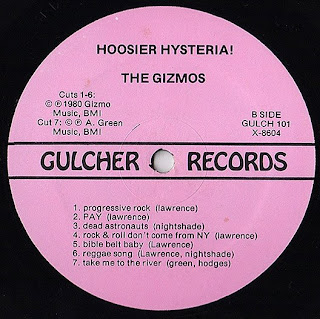 Vermines, The - 1980 - Sometimes 7'' (FRA)
download
.
VERMINES: Sometimes / Another Piece / Rock In Belfond 7` (Rive gauche Records) 1980. From Rouen. Bassist and singer Ted Caddy now plays in a band called "Chainsaw" with the drummer of the Vermines and D. LABOUBEE who is / was the guitarist / singer of the DOGS. Vermines recently released a Best of CD with lots of unreleased songs and songs from side project bands.
.
source Punk Rock Picture Sleeves (link)
Posted by isksp at 8:21 PM 2 comments: 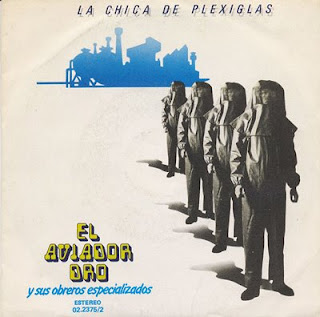 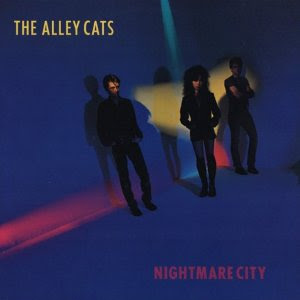 Alley Cats - 1981 - Nightmare City (US)
download
.
One of the minor players in the early days of Los Angeles punk, the Alley Cats (Dianne Chai on bass and vocals, Randy Stodola on guitar and vocals, and John McCarthy rounding out the trio on drums) released a number of singles and albums on various labels that made minor waves in the scene, before disappearing and then re-emerging under a different moniker with a larger lineup in 1985. Their earliest output — the single "Nothing Means Nothing Anymore" — was released on Dangerhouse Records (the independent that once boasted such legendary acts as the Avengers, the Bags, and X). They then jumped ship to Time Coast, which released their follow-up singles, as well as their first album, Nightmare City, in 1981. Their final album (on major label MCA), Escape from the Planet Earth, hit stores in 1982, and was the last heard from the trio until 1985, when the group emerged again with extra members as the Zarkons. In 2007, a CD/DVD anthology (simply titled 1979-1982) containing most of the band's work was released on the Laugh.com label. (Christopher M. True)
.
source allmusic (link)
Posted by isksp at 8:22 PM 3 comments:

Email ThisBlogThis!Share to TwitterShare to FacebookShare to Pinterest
Labels: - US, Alley Cats 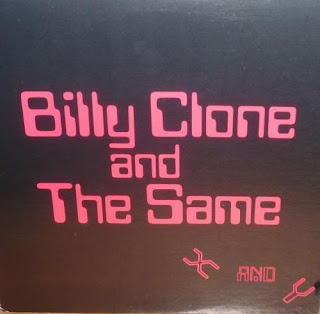 Email ThisBlogThis!Share to TwitterShare to FacebookShare to Pinterest
Labels: - US, Billy Clone And The Same 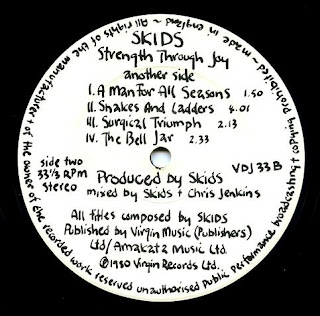 Skids - 1980 - Strength Through Joy (UK)
download
.
The Absolute Game was The Skids' 1980 third album (not counting the two different versions released of their second album, 1979's Days in Europa) and was produced by Mick Glossop.
The album continued the Skids' progression from a punky sound into a more mellow one - paralleled by many bands of the period. The album has a great deal in common with Days in Europa, but not much with its successor, Joy. Around this time the band were driven by internal rifts and disagreements, leading to various members coming and going. Soon after the release and live concert tour of The Absolute Game, Adamson and Baillie left the band. (Adamson had already played on one song from the album Joy before leaving, called Iona.) Adamson went on to launch the career of his new band, Big Country, and Baillie moved back to Scotland to live. A great deal of Big Country's future sound and style can be heard in this album. In particularly on Hurry On Boys, which features bagpipe simulations and real didgeridoo. Joy has a completely different sound to other Skids albums, and some fans consider The Absolute Game to be the last canonical Skids album. This was also the first album featured Richard Jobson and new bassist Russell Webb as a working duo, while Adamson and Jobson relationship was in decadence, reason the lead guitarist dropped out. Jobson and Webb as a constantly musical duo worked constantly until 1988, when their last band The Armoury Show failed to get hits and split up.
ControversyInitial copies came with a limited edition second disc entitled Strength through Joy. Richard Jobson, the Skids' lead singer, later stated that this title had been taken from Dirk Bogarde's autobiography and was not based on the Nazi slogan Kraft durch Freude. However it continued the controversial theme of the first release of Days in Europa, which had been withdrawn.
Strength through Joy – limited edition second disc available with initial copies only
tracklist:
1. "An Incident in Algiers"
2. "Grievance"
3. "Strength through Joy"
4. "Filming Africa"
5. "A Man for All Seasons"
6. "Snakes and Ladders"
7. "Surgical Triumph"
8. "The Bell Jar"
.
source Wikipedia (link)
Posted by isksp at 7:09 PM 4 comments: 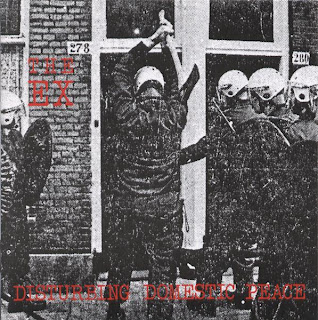 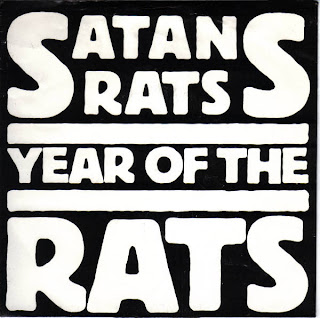 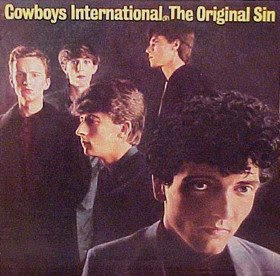 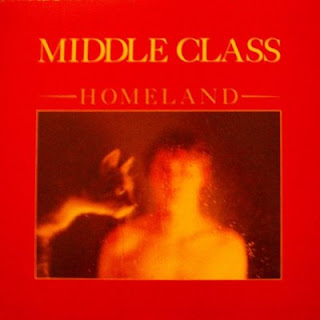 Middle Class - 1982 - Homeland LP (US)
download
.
Middle Class were always one of my fave LA bands and probably a band few people heard of anyway. They didn't have a big-mouth headman like Darby and didn't dress punk or anything, just plain looking no fashion so nobody picked up on them even though they played a lot and did some great music... The 'Out of Vogue' EP came out on Joke Records in 1978 and the funny thing is here's a thrash band 3-4 years before its time. I play songs like "You Belong" and "Insurgence" for people and they refuse to believe it's from 4 years ago, I mean it sounds like all the new bands. Grinding one-minute songs with an intense Discharge/Crass/Nihilistics sound... Two cuts on the 'Tooth and Nail' compilation followed in 1979, a great record that also included Germs, Flesheaters, UXA, Negative Trend, and Controllers... In 1980 the 'Scavanged Luxury" EP was released on Torture Garden (great name!). Uhoh, here's where the changes started, well not really, this was just as intense but a progression from their older sound, heavier on the bass and a more driving rhythm at a steady tempo not the 78rpm of the past and a much greater interest in instrumentation. Another great overlooked record... Finally the album, something I've looked forward to for a long time and, yeah well, the sound has changed a lot since the early days and I can't really blame them. Still, this record has the same distinctive Middle Class feel, maybe it's because of Jeff Atta's vocals. It continues devoloping the style of the last EP but its a lot more mellow and introspective, the cover and music bring to mind bands like the Cure, Joy Divison and the Banshees, I hope they don't mind those comparisons, studied I know but... A great bass sound and cutting guitars propelled along by a steady drumbeat. And the vocals have a far away sound that creates a quiet somber mood. Lyrics become more than words, a strange feeling, that strikes hard. "Out of My Hands", "Ritual and Deceit", "A Skeleton at the Feast"... I like listening to this album sometimes but I still miss the old Middle Class. Maybe they went too far. (JJ, from FLESH & BONES, 1982)
.
source Kill from the Heart (link)
Posted by isksp at 6:34 PM 1 comment:

Email ThisBlogThis!Share to TwitterShare to FacebookShare to Pinterest
Labels: - US, Middle Class 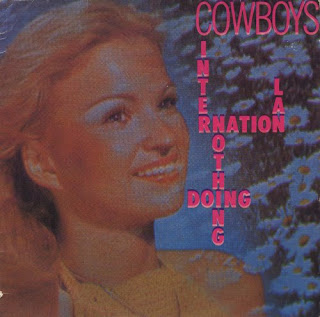 Spelling Mistakes, The - 2003 - Epileptic Apocalypse (1979-1999) (NZ)
download pt. 1
download pt. 2
download pt. 3
.
Despite being a popular live act with a Top 20 hit the Spelling Mistakes only managed to release one and a half singles in the late 70's.This 50 track double CD archives all The Spelling Mistakes material from their original 1979/1980 period, through to their critically acclaimed 1998/1999 reunion. Disc one covers 1979/1980 including all their original single sides and unreleased demos, plus remixes of the singles, a live-to-air and live recordings from the XS Cafe. Disc two covers 1998/1999 including a 12 track "lost" album of studio recordings as well as live recordings from two of their first reunion shows. Includes a 16 page colour booklet with detailed liner notes, rare photos and loads of original artwork and posters from band members' archives.
.
source New Zealand Cds (link)
Posted by isksp at 6:23 PM 4 comments: