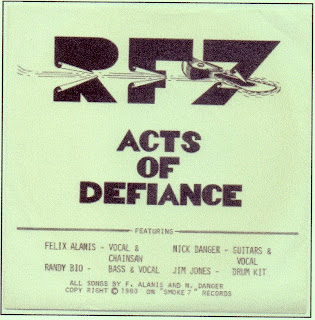 RF7 - 1980 - Acts of Defiance 7'' (US)
download
.
RF7 is a long-lived, southern California punk rock band that began in 1979 by Felix Alanis and small time child star of the Sheriff John show Nick Lamagna. Felix also began the record label Smoke Seven Records and signed his band and many others who were ignored by the big labels then, such as Redd Kross, Bad Religion, JFA, Crank Shaft, Circle One, Sin 34, Youth Gone Mad, etc.
From the beginning, the RF7 sound was not clearly punk but really what would be called today hardcore punk. Felix Alanis has always mixed middle class virtues with strange religious imagery in his lyrics. Nick Lamagna added guitar and music that had a twist more "rock" then some punks preferred. Walt Phelan added a drummer's drumming, and the bass player seemed to always change, with Robert Armstrong perhaps being the most solid recorded bass man from 1980-83, and again on 1990's classic Traditional Values album. On 1982's Fall In album, the band brought in super producer Geza X.
The band continues today with their latest release (Addictions and Heartaches) on the Puke and Vomit label, which also re-released Public Service and Sudden Death compilation albums. Their early releases are available on the Grand Theft Audio label, as well as Bomp and Alive records
.
source Wikipedia (link)
Posted by isksp at 5:13 PM

Email ThisBlogThis!Share to TwitterShare to FacebookShare to Pinterest
Labels: - US, RF7

THANKS!
I´ve been waiting all my life to hear this one.

Thank you so much. Love this band and have for decades.

I think there is a data click in almost every track. Not sure why gonna try to download again.