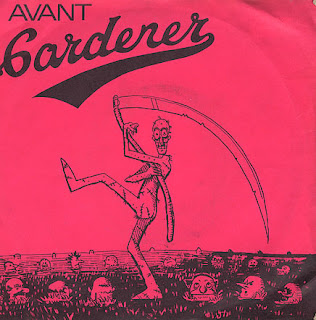 Avant Gardener - 1977 - Gotta Turn Back EP (UK)
download
.
From the Dartmoor town of Okehampton near Exeter, Avant Gardener were one of the many oddities thrown up by punk. Ultra primitive Beefheart influenced noise meets the Velvets. The band apparently won a Virgin Records sponsored talent contest, which resulted in this EP featuring Gotta turn back/Strange gurl in clothes/Back door/ Bloodclad Boogie for the label in 1977 (the earlier ultra raw demos for which make the finished release sound polished by comparison!). After this the band released numerous singles and albums before splitting in the eighties.
"The singer Russell smelt so much, he was really revolting! He used to turn up and he hadn't shaved and he looked like he had slept in his clothes, he always smelt. Ever such a nice bloke but I used to be glad when he left the studio. One session, they bought a steel guitar player who really couldn't play and I said to Russell " I don't want to shatter your illusions or anything but this guy hasn't a clue what he's doing" He was so bad that I had to kick him out the studio in the end; physically drag him out by the scruff of his neck to get rid of him! They had come in to record two songs and they phoned me back later to say that Virgin Records had given them an advance to do their own thing and develop their sound, so they came back and recorded some more. Sometimes I'd be in the studio with them until three o'clock in the morning trying out ideas until we ended up with what they wanted. They weren't any better musically than any other band I worked with except because of their appearance and the fact they could just about play their instruments, I could see that they would make an r'n'b band like The Rolling Stones. I was doing my best to get them to change the rhythm of a song very slightly to put an r'n'b roll into it and I showed the guitar player how to play some r'n'b but he couldn't play it so it didn't turn out that way. I showed him a riff based on the chords he was playing but he couldn't move off the one chord. His little hands just couldn't do it. The bass player couldn't play either. He could only do down strokes and I was trying to show him how to do up and down strokes to get a crisper sound but he couldn't do it; he kept missing the strings! The thing that struck me was the rawness of the band in every sense of the word. Listening back to The Avant Gardener session now, it still sounds terrible to me. The band had reached a certain stage and they were just playing to the little musical ability they had. The whole band was a complete mess. They were always late and scruffy and just too bloody idle to do anything. Russell couldn't sing to save his life but Virgin obviously saw something in them. Apparently, Virgin held auditions in some sort of mobile studio that was travelling through the country for about three hundred bands and Avant Gardener was one of those bands. All I can say is that most of those three hundred must have been absolute crap! Avant Gardener got an advance from that. If you were in a band back then and knew two and half chords and went up on stage shouting at everyone then you had a good chance of getting signed."
John Greenslade, producer of the bands pre Virgin demos, quoted in the sleeve notes to Hometown Atrocities Records Year Zero compilation CD.
.
source punk77.co.uk (link)
Posted by isksp at 4:18 PM

Yet another gem from out of nowhere. Thanks.

Always loved their track on the "Guillotine" comp... (Strange gurl...). The cover's funny! Thanks a lot!
Fernando :)

Thanks for this, bought it when it came out, excellent record slated by music press on release John Peel played it and seemes to find it amusing i have 2 albums 'Dig it' and 'Church of the inner cosmos'on Italian record label

i'll be very much grateful if you share this LP if us hehe...

i'm looking for this two for ages and never founded it

this is really the most amazing blogspot. i will find this EP, i will buy it.
thanks!

I could see that they would make an r'n'b band like The Rolling Stones.Guildford gardener I was doing my best to get them to change the rhythm of a song very slightly to put an r'n'b roll into it and I showed the guitar player how to play some r'n'b but he couldn't play it so it didn't turn out that way.