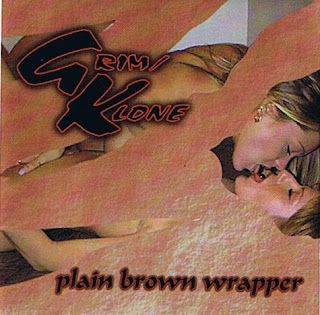 Grim Klone - 1999 - Plain Brown Wrapper (US)
download
.
The Klones formed in Cherry Hill, New Jersey (a suburb of Philadelphia, Pennsylvania). We played in my parent's garage and were truly a "garage band." Cherry Hill was and is a funny place with an interesting community. We definitely did not fit in. We would play really loud and usually a neighbor or two would come over to see what the fuss was all about. I lived on a small street so we all knew each other so luckily no one ever called the cops. Juan and I had been friends since Jr. High School. I have known Spam since kindergarten. Bentley was a friend of Juan's from where he worked (a mall in Greater South Jersey). We all had a common love of rock music of various types. We needed a niche and punk seemed like a good idea, since you really didn't have to be that good to play it. In general people hated us. They thought we played too loud and our music wasn't that good. We were rough, but we had a good sound that matured fast.
My bandmates are "Dr. Juan" (guitar, John McPartland, Jr.), Bentley (bass, Billy Bennett), and "Spam" (drums, Samuel "Buddy" Dranoff a.k.a "Noah Vale"). There are many players on the CD including "Mad Dog Pierre" (drums, Pierre DiPilla) who is currently whereabouts unknown. I sang, "Major" Matt Grim. It was all done for fun, illicitness, alcohol and chicks. We had lots of fun and alcohol, but few chicks. We have released 3 singles. The first single was bootlegged on "Killed By Death 10" on Redrum Records.
We all are great friends keeping the Klone dream alive. Guitar Johnny (guitar, Johnny Sturdivant) plays on three tracks: "Blond Bitch, Black Root", "Punk of Today" and "Blank Space". He plays the axe like nobodies business. Thanks to "Eddie Coitus" too (inspiration all tracks, Hal Capner).
So there is a brief history of the band. It ain't sayin' much but it sure is a** kicking musik!
.
source Amazon (link)
Posted by isksp at 5:36 PM

Email ThisBlogThis!Share to TwitterShare to FacebookShare to Pinterest
Labels: - US, Grim-Klone Band

Great Great Great !
Thanks a million Felipe !
For ten years I've been looking for this one !

Yeah Felipe very nice of you to post this.....sank yu

Many thanks for this post,Felipe!

Hi,
unfortunately the link seems to have been hijacked by one of those dubious downloaders you have to install - doesn't go to multiupload anymore. Any chance of a repost? i only just found out about these guys and already I can't find the music anywhere.
regards
Chris