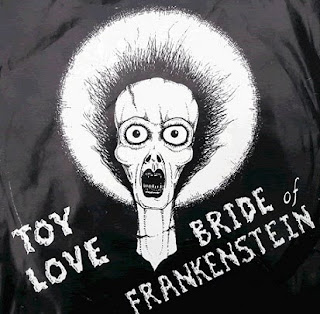 Toy Love - 1980 - Bride of Frankenstein 7'' (NZ)
download@rapidshare
.
Toy Love was a New Zealand alternative/punk rock band fronted by Chris Knox. Other members were guitarist Alec Bathgate, bass player Paul Kean, drummer Mike Dooley, and keyboard player Jane Walker. The band developed out of the earlier punk band The Enemy in Dunedin, New Zealand, and are often regarded as the progenitors of the Dunedin Sound movement.
Toy Love were together for less than two years (1978–80) and spent a large part of that time in Australia. They released just one (self-titled) album, however the band members were apparently appalled by the mixing of the tracks which took the edge off the band's deliberately raw sound. In April 2005, this album was remastered and released along with a bunch of demos and unreleased tracks as a double CD entitled Cuts.
After Toy Love broke up, Bathgate and Knox remained together as the Tall Dwarfs.
.
source Wikipedia (link)
Posted by isksp at 6:28 PM

Are you going to post that Gary Valentine "Tomorrow belongs to you" cd? Do you have the Nerves "tv adverts" 7"?

about the nerves ep, sorry, don't have this one

about the nerves ep, sorry, don't have this one