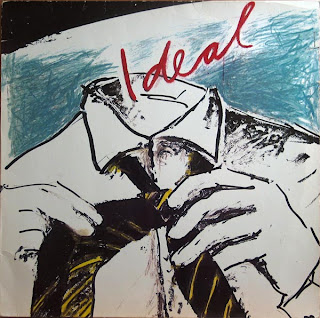 Ideal - 1980 - Ideal LP (GER)
download@rapidshare
download@multiupload
.
Ideal was one of the more successful German Neue Deutsche Welle music groups. It is best known for the songs "Blaue Augen" (Blue Eyes), "Berlin", and "Monotonie" (Monotony).
In early 1980, Annette Humpe, Ernst Ulrich Deuker, Frank Jürgen "Eff Jott" Krüger and Hans-Joachim "Hansi" Behrendt formed the band "Ideal".
Annette Humpe had played previously in the band Neonbabies alongside her sister Inga Humpe, before forming Ideal. Eff Jott Krüger previously played for the X-Pectors. In May 1980, Ideal released their first single on Eitel-Imperial—their own record label—entitled "Wir stehn auf Berlin" / "Männer gibt's wie Sand am Meer", which soon sold out.
The British rock band Barclay James Harvest—who were particularly successful in Germany—performed a free open air concert on August 30, 1980 in front of the Reichstag building. The 150,000 visitors also saw Ideal, as they were booked as an opening act; this was a large step toward mainstream popularity.
In November, Ideal released their a self-titled LP on the Innovative Communication label. The album reached number three on the German charts. Oddly enough for an LP, it was supposed to be played at 45 rpm, the speed intended for singles and which results in improved sound quality. This was not done with subsequent releases. This was followed by concerts in Switzerland and Austria. In August 1981, Ideal played in front of 22,000 fans at the Berliner Waldbühne. This was broadcasted nationwide by SFB as part of Rocknacht.
Following this, the band began recording a second album. Together with the help of producer Conny Plank, they produced "Der Ernst des Lebens", which was released in October 1981. At the same time, Ideal's debut album went gold, and marked the first time an album released on an independent record label went gold.
Ideal performed 27 sold-out concerts during their 1981/1982 tour through German-speaking countries. By their final concert on the tour, they had received another gold record, this time for "Der Ernst des Lebens."
In the fall of 1982, Ideal produced their third album, "Bi Nuu", under the direction of Micki Meuser. It entered the chart in December 1982, but only peaked at 20th place; these sales did not meet the expectations of the record label and a planned tour was cancelled.
On March 31, 1983, Ideal sent an announcement to the media via Telex: "The group Ideal is dissolving. From the beginning, Ideal was planned as a project, a corporation, which was intended to exist as long as the differences between the individual members made the work enjoyable and creative. Our music was always a result of the clashing of four different personalities, not of compromise, but of creating songs that all enjoyed. In three terrific years, we have gotten the best out of this constellation."
June 1985 saw the release of "Zugabe" (Encore), a live album of "remembrance, farewells, and gratitude for all the fans".
On April 26, 2007, Frank Jürgen Krüger died at 58 following a long fight with cancer.
.
source Wikipedia (link)
Posted by isksp at 7:37 PM

Once day i bought this vinyl in the record shop, because IDEAL is one of my favorite NDW band. However, the LP was bad, i couldn't playback it. I was very angry, but finally the record shop's boss took back IDEAL lp. I exchanged it for a fantastic Blondie LP!

This is my little story with this great new wave LP.