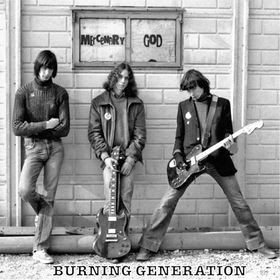 Mercenary God - 1981 - Burning Generation (IT)
download
.
Born in Gemona del Friuli (UD – Italy) at the end of 1979, in full “punk” period, the Mercenary God have distinguished herself from several other Italian bands from the same time because they where able, in the two years of their short but intensive musical history, to perform outside the proper region borders, attaining to cut a record reviewed on the top musical magazines in that time. In some kind of "competition" with the more structured Great Complotto, the friulan punk circuit was developing himself already from 1977 around bands in continuos mutation (Metalshock, Alternative, Dial 113, Commandos), but was not able to get the creative and organizing homogeneity of the pordenonese scene. The Mercenary God history was from the beginning up for his own: geographically isolated , unconnected to all post-punk trends and too young and ingenuous to capitalize the fast growing celebrity, especially amongst insiders. Their music was starting from the English and American punk from the seventies, accurate avoiding the rising militant hardcore, and mix himself to a certain very personally psychedelically garage, dotted with noise experimentation's and good old rock’n’roll. After a few concerts, most completely self managed, the meeting with the trevigians No Submission and the reporter Claudio Sorge, brings the realization, in 1981, of the split-LP “Challenge”, produced by the Marco Melzi's already born Lombard records label Bootleg Records. He record was including, despite the Mercenary God and the No Submission, also the udineses No Suicide. In the same year 11 track where recorded, destined to the first LP of the band (Burning Generation), kept unpublished until the publication, happened at the end of 2004, thanks to the independent label Big Star Rolling in Preganziol (TV).
.
source iSOUND (link)
Posted by isksp at 2:08 PM

Hi Felipe! Great posts lately... but not many comments, huh? Thanks for this one! Well, as the article says, this was not released in 1981 in fact but in 2004. Back in the day the band seems only to have had a couple of tracks in that 'Challenge' comp...
Thanks also for the Khrisma post, didn't know that curious band. Another Italian punk request... the LP "Third world war" from S.I.B. (1981)!! The 2-3 tracks I've heard from them are killers! Great singer of the Alice Bag school if you know what I mean... Saludos
Fernando :)

didn't see any of your comments for a while... indee this lp was released in 2004, but i like to put the date always referring to the recording date

about the Third World War LP, i got this one... i'll post it with some other italian bands from the 80's that i was planing to post over here

Thanks Felipe.....going to d.l this and listen to it (as i'm not much in italian punkrock)

Yeah I haven't commented lately, these last weeks... I try to comment every time I download but I'm not always inspired to say something and these last weeks haven't visited much my fave blogs either, so... About the SIB album, that's great news... can't wait!...
Saludos,
Fernando :)

I'm with topper on this one, But this band looks like it has potential.

This rocks. And *bonus!!* their disco parody sounds like The Desperate Bicycles!


but about the hole album, just think that is a great record and that it sounds a lot with the music heard nowadays (90/00's)

Yes, underneath everything it's got the swing that you get in classic rock and roll.